What to do with a Kohlrabi

It only took one Kohlrabi to turn me into a Kohlrabi fan, but one year on I finally have my second Kohlrabi. 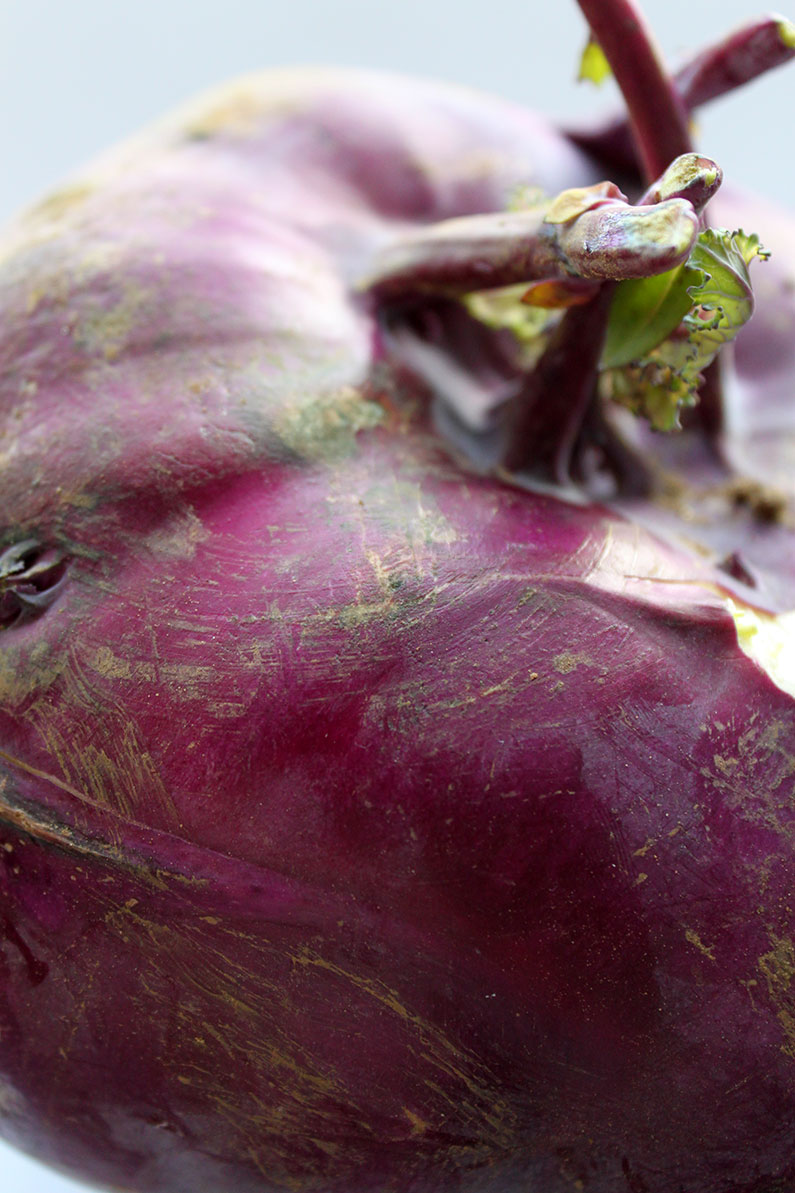 I originally posted this back in July 2009, and have been waiting over a year now to get my second Kohlrabi through my organic veggie box. This week I received a huge purple turnip looking thing, and once again I thought “what the heck is this?”. Then from somewhere in my memory I dredged up this…

Mine was green, although quite often they are purple

I was ecstatic to find another Kohlrabi, as I have been disappointed before, the first time I got a Celeriac I thought I had one right until I sliced it open…

For those who don’t know what a Kohlrabi is, from Hugh Fearnley-Whittingstall’s article in the Guardian:

It has about it the texture and crunch of a radish and something of the taste of a mild turnip, cauliflower or broccoli stem, making it a tasty addition to summer salads and stir-fries.

I would add to this, because I don’t think the taste of mild turnip or broccoli stem really sells it… It reminds me most of a mild radish, with that slight peppery taste.

The article has three different recipes for using Kohlrabi, but I didn’t try any of them instead I opted to half it, and make two salads. One with raw kohlrabi and the other where it had been cooked.

To showcase raw Kohlrabi I used a really basic recipe (that came in my veggie box) for Kohlrabi and Carrot salad. This recipe is quite like a light coleslaw without the creaminess. However it uses cumin seeds, to give a wonderful depth of flavour. I would say in addition that while the first time I made this salad I grated both the carrot and the kohlrabi, I infinitely prefer it when they are both sliced into matchsticks. It’s much crunchier this way, and can be a perfect snack. (On Friday afternoon at work I ate my way through a huge batch, so much so that I had none left for “new” photos). Although this way it is much less like a coleslaw. 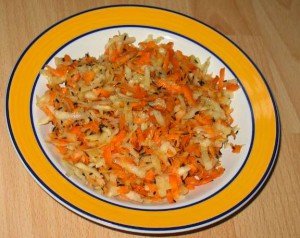 We had this is an accompaniment with hamburgers for dinner last night. All the flavours were quite delicate: cumin, the lemon adds a subdued zing and the kohlrabi and carrot both add crispiness. 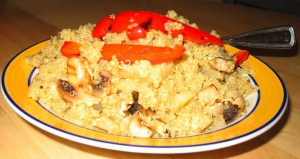 I didn’t make any changes to the recipe, and it was wonderful. I think the red pepper really made it though, it gave it a sweetness and added moisture to the salad. I love mushrooms, so I am not complaining but I don’t feel that they really added much to the salad. So I don’t think you would be risking much if you decided to leave them out.

It was the first time I had cooked with Quinoa too (last weekend I really was in a branching out kind of mood) and I have to admit I like it a lot more than cous cous. Quinoa when cooked plumps up a fair bit more than cous cous so it feels like you are eating a proper meal.

The recipe used cumin as the main spice so I thought that it would work quite well with some quick grilled chicken. The chicken was marinaded for a few hours in a couple of tablespoons of low fat natural yoghurt, 1 teaspoon of cumin, and 1 teaspoon of tumeric.

A simple salad with tandoori chicken

I think both of these recipes were really good summer dishes, where as the ones in the Guardian were more typically autumn/wintery. Having now had the opportunity to have a second Kohlrabi, I have to say it was the Kohlrabi and Carrot salad that made my list first (and second, since I made too batches). While I liked the Quinoa recipe very much I just don’t think that cooking Kohlrabi is making the most of it. Once cooked it’s a lot like a turnip. However I could yet still be proved wrong, I have some more Kohlrabi recipes up my sleeves, and I am sure I will share them with you sometime soon!

You should also see my Kohlrabi and Corn Salad recipe and my Kolhrabi Slaw recipe.

Got any great Kohlrabi recipes? Please let me know!