In keeping with the Japanese theme this month, I am going to be going all minimalist on you and keeping the words short. And yes it has everything to do with me running late, and my blog being rather temperamental these days.

The November 2009 Daring Cooks challenge was brought to you by Audax of Audax Artifex and Rose of The Bite Me Kitchen. They chose sushi as the challenge.

More details on the recipe can be found at the Daring Kitchen Sushi [PDF]. 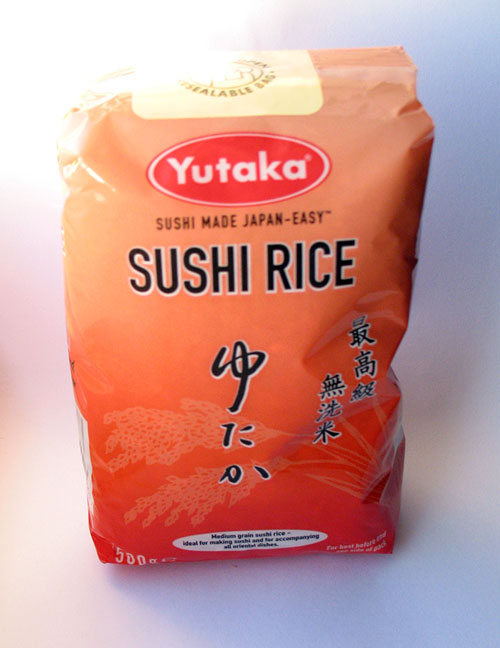 Making sushi rice is a much longer process than how I normally make rice, but when making a big batch (I ended up with around 7 cups of cooked rice) it was well worth it. 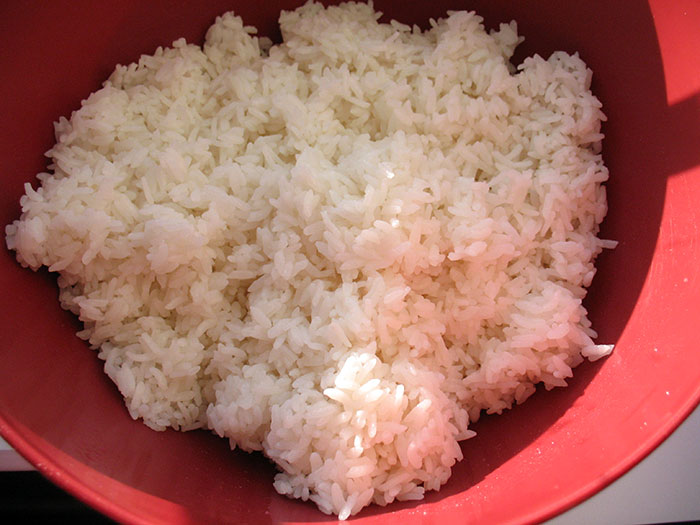 The challenge this month was to make 3 different types of sushi (I made 2 of 3) below you can see detailed photographs of making dragon rolls (inside out rolls). 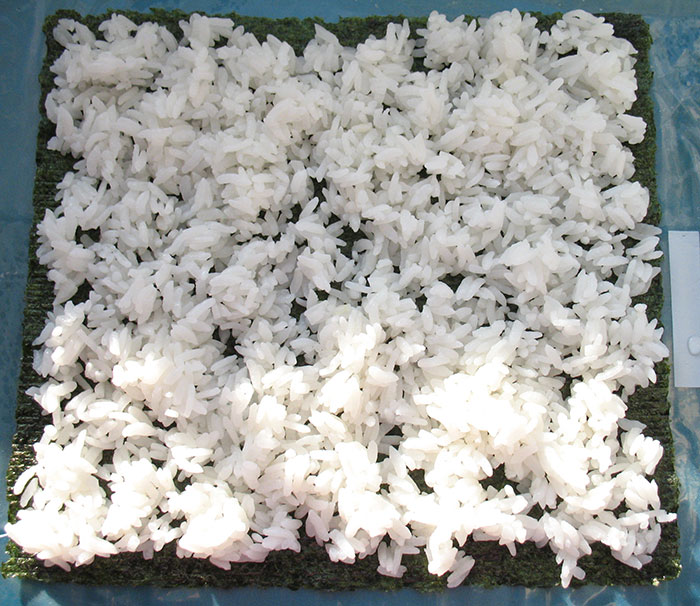 Spread a cup of sushi rice over the seaweed Nori. 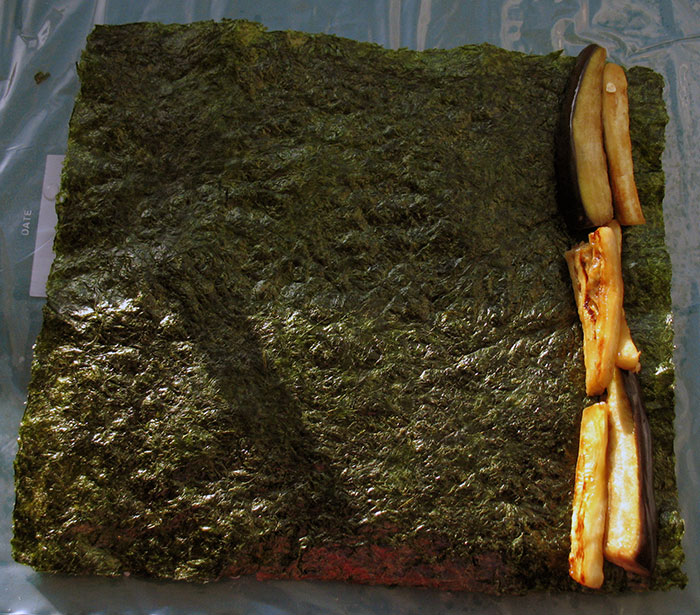 Fill the sushi, I used aubergine as I felt that in the vegetable world it was most akin to using, the recommended, eel.

Once rolled you end up with the sushi rice on the outside, and the seaweed on the inside and topped off with roasted red peppers. 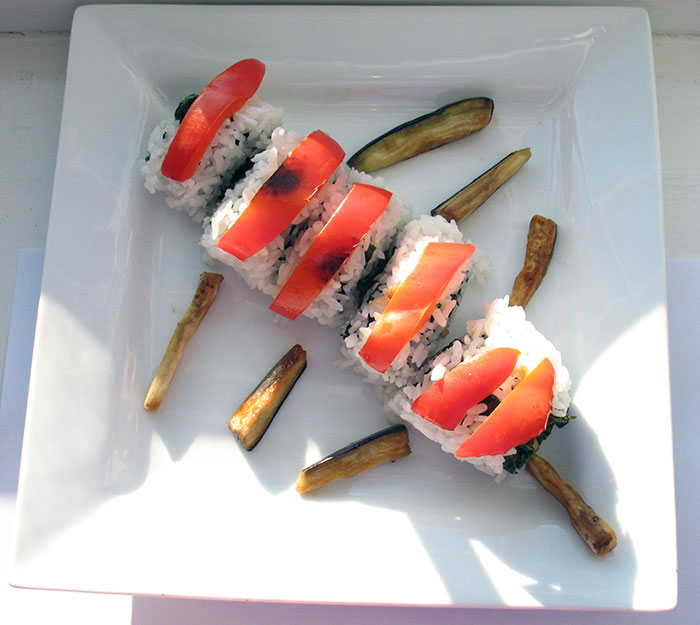 The idea with the dragon rolls is to be creative, and some other Daring Cooks went a lot further than I did. But you get the general idea, the other half said it looked more like a rowing boat than a dragon – but you can’t please them all. 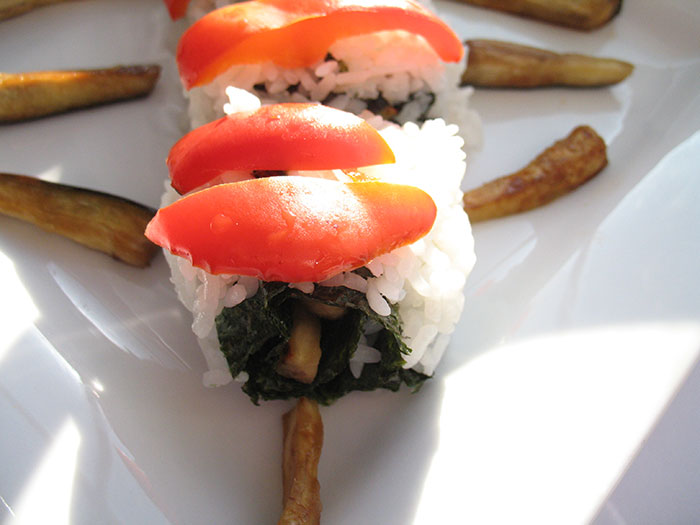 I made a really basic sauce to go with the sushi, a little bit wasabi paste, soy sauce and, ahem, tomato ketchup. It was ok but was hardly going to set the culinary world alight. 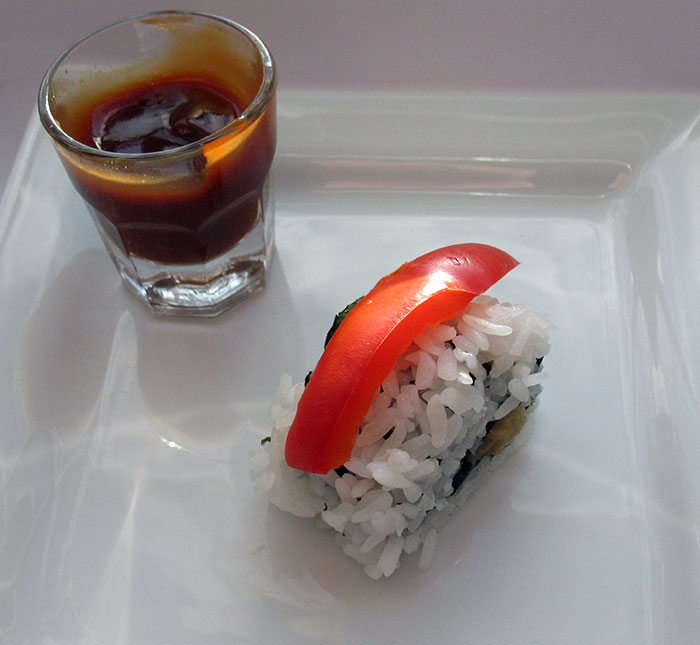 The second type of sushi I made was the Nigiri Rolls. The idea being that it turns out I am not all that fond of seaweed, so I made the only other type of sushi that doesn’t use it. 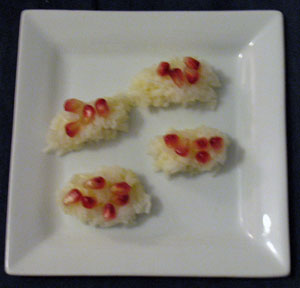 Nigiri rolls are just compacted sushi rice with toppings on. In my ill-fated attempted I tried to make a sweet sushi, topped with White Chocolate Ganache and pomegranate seeds. I still think it might work, it’s just that my photos were terrible, and the ganache too runny to attach the pomegranate seeds as I had envisaged.

This was a great challenge, was difficult but also interesting. I had great fun, it’s just a shame I don’t really like seaweed 🙂