I guess everyone writes about this meal on their blog, or maybe no one does because it’s just too common place. I don’t want to blog this because I believe that my recipe is better than anyone else’s, or because mine is somehow different to the average Bolognese. I want to write it because this is the average Bolognese. 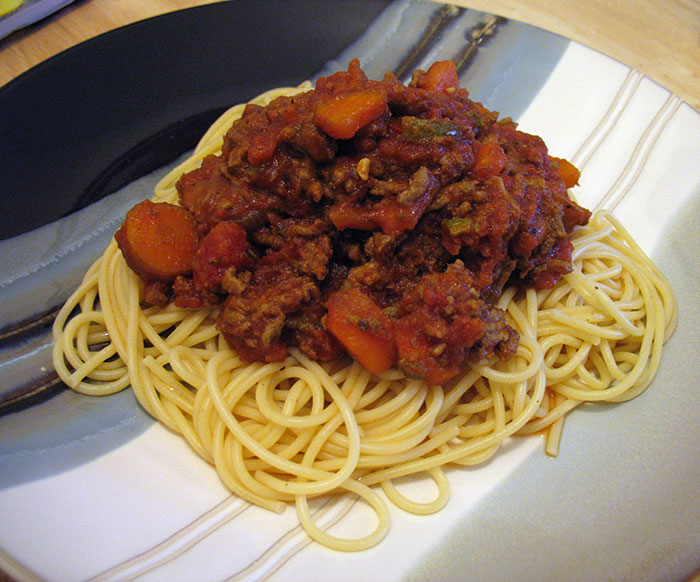 Around this time last year I started my journey, albeit slowly, into a world which led me to cooking, baking and eventually blogging. I bought the Good Food Autumn magazine as I was tired of all the meals I already knew how to cook, and was looking for new ideas. Originally it was to cook hearty healthy Sunday night dinners during the cold winters.

One of the only things I made before the Autumn Cook Book was Spaghetti Bolognese. Over the year that I have been trying many new things that Spag Bol has been left behind while I try Kohlrabi and Quinoa or catchup with the Daring Bakers. This week when the Scottish weather turned and any hopes of an Indian Summer vanished, I needed comfort food.

So I back turned to my old staple, a year of cooking does change you and I couldn’t quite go back to the way it was before. This time there was no jarred sauce from the supermarket or packet of Bolognese powder. I now make it from scratch entirely, which is an achievement – since my track record with making tomato sauces was terrible until recently.

Now I make a large batch of mince with onions, carrots and courgettes, the first night it becomes Spag Bol by making a great tomato sauce to go with it, the second night I make Chilli Con Carne, by adding Kidney Beans and a spicier tomato sauce. (Recipe for Chilli Con Carne to follow).

This way I get two simple meals out of one batch of mince.

This can be kept in the fridge for up to two days, or frozen and used within a month.

This mince is the basis for many different meals I make, usually dependant on how much effort I want to put in. Apart from Chilli and Bolognese sauce I have occasionally kept it even more simple just adding some gravy, and serving with some potatoes and veg.

One of the great things about this recipe is that you can make the mince ahead of time, allowing you to have from scratch Spag Bol when you get home from work on a weeknight.

~ Serves 2 dinner sized portions, using half the above Basic Mince.