Yesterday I found a new food blog Smitten Kitchen I am sure you have all been reading it for years… I then found it again when I did a search for “Leek Quiche” this morning. I am starting to branch out of my cooking and baking comfort zone and what better way to start than with a summer quiche!

I loved the look of this Leek and Mushroom Quiche and decided to give it a go. 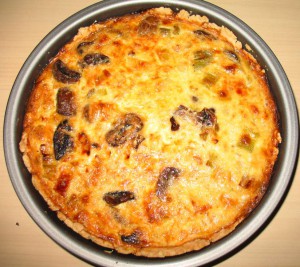 Leek and Mushroom Quiche, straight from the oven

I am not going to reproduce Smitten Kitchen’s recipe here, but I will list the few changes I did make. 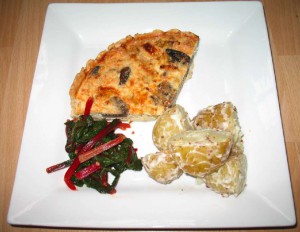 Leek and Mushroom Quiche, served with potatoes and red chard

To serve, we had Jersey Royal potatoes (with mayonnaise and Dijon Mustard) and Swiss Chard.

All in all it was a lovely meal. The pastry was a little bit on the crunchy side, but this could have been due to my inability to roll out the dough and have it remain in one sheet! This meant I had to press it together in the tin, which I imagine could account for the crunchiness rather than the flakiness I would have expected.

One note on the Coconut Oil, is that while it made a really good quiche, I did for the first time notice the lack of the buttery taste in the pastry. In the future if I was making this for a special occasion I might go ahead and use butter, but I think for a normal everyday quiche I’ll stick to the Coconut Oil!