The July Daring Bakers’ challenge was hosted by Nicole at Sweet Tooth. She chose Chocolate Covered Marshmallow Cookies and Milan Cookies from pastry chef Gale Gand of the Food Network. 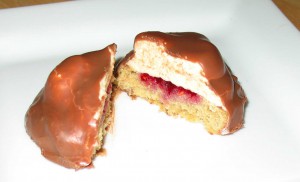 Where to begin? This was my first month of Daring Bakers and boy did I find it hard, so hard I only made one of the two recipes. I decided to make the chocolate covered marshmallow cookies first, as they looked like a challenge.

I have to say that I was a little surprised at the nature of this challenge, I would have assumed it would be more seasonal. It’s the middle of the summer there are more fruits in season than you can shake a stick at, and we make chocolate covered marshmallow cookies? It just seems such a waste, these would have been way better to make in winter, when my kitchen is cooler and it isn’t so easy to come by fresh fruits.

The milan cookies, seemed to me just an ordinary biscuit with some melted chocolate in the middle – not why I signed up for the Daring Bakers at all. Maybe now I wish that I had made the Milan cookies and given up on the mallow cookies, but it is way to late for that now. In the end I had to do make them twice because the first time was such a disaster.

First you have to bake your cookies, this in itself is not too difficult, but the dough was so wet that it was impossible to role and shape (at least for me) so my cookies ended up bigger and thicker than they really should have been – they were huge. 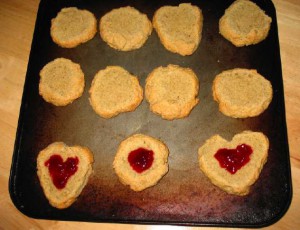 I made some of mine into heart shapes to be a bit different, and added jam into some, because here some of the commercial versions have jam, and I prefer those.

The next step is to make the marshmallow. Marshmallow is difficult, to me at least, so many things going on at once heating sugar to immense temperatures, whisking eggs to stiff peaks, dissolving gelatine in water, this is definitely a recipe to make sure you have everything prepared.

One of the main ingredients of marshmallow is corn syrup, and I spent quite a while looking for corn syrup in the supermarkets but to no avail, UK supermarkets just don’t stock it. A number of substitution recipes went up on the forums, but in the end I used it with golden syrup (which is readily available).

Once the marshmallow is made you put it in a piping bag, and pipe a “kiss” on to each cookie. My cookies were so big that mine weren’t so much a kiss but a full on snog.

In my first attempt, the marshmallow didn’t set, and it just dripped off the cookies, there was no point even covering these in chocolate, it was definitely a throw away and start all over again job. 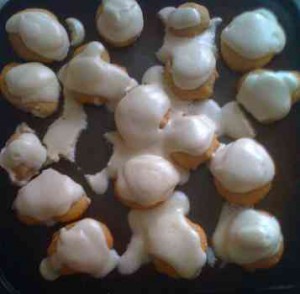 The marshmallow didn’t set because I got all the ingredient amounts mixed up, one of the problems of trying to do conversions of cups to metric, and halving the recipe at the same time. 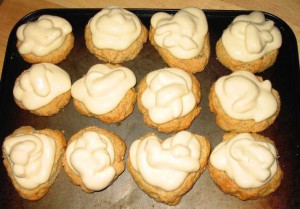 Which was a little disappointing, even thinking back on it I am not sure how you get that perfect mallow shape. A little disheartened I carried on.

The last step is to melt chocolate and dip the cookies in them, making sure they are entirely covered and getting them back out again quickly. 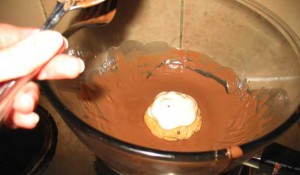 Now from the recipe it sounded like you were to make so much melted chocolate that you could just dip them in. I however wasn’t going to waste all that chocolate, so my method became more of a drop the cookie in then use a spoon to cover them with chocolate. 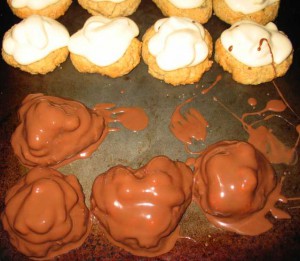 You can see it started to get quite messy

This worked fairly well, however my main mistake was to keep the melted chocolate over heat while I did this, after the first couple of cookies the chocolate must have got too hot, because it started to melt the marshmallow! After finally getting my marshmallow to set, I again ended up with a soggy marshmallowly mess, although this time with added chocolate. 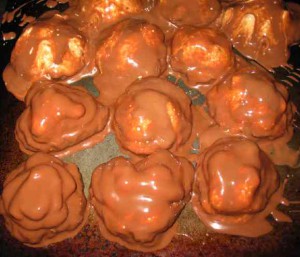 See how the ones at the top of picture look more white, this is because the chocolate is melting them

You then leave the chocolate to set, as I happened to making these during a heat wave this didn’t work and they really needed to be kept in the fridge to stop the chocolate from melting.

and a heart shaped one 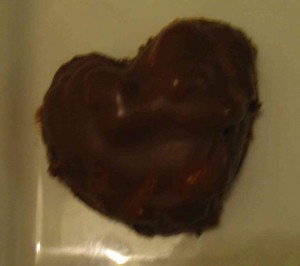 Wow even recounting all the ins and outs of this challenge is tough, and I have to admit I shed a few tears of frustration over these cookies. Although I blame the heatwave and then having the oven and boiling sugar at the same time for that.

Would I make these again? No. I never want to put myself through that again. Plus I don’t really like marshmallow (unless its cooked over a barbecue) and I am not a huge chocolate fan.

Will I continue with Daring Bakers? Yes. While this was difficult that was the whole point, to force me to try something I wouldn’t normally or ever choose to do.

To see how they are supposed to look and for the recipe check out Tartelette.