So as you guessed I am in a bit of a cherry kick right now, and when I saw this recipe for raspberry bakewell cake in this months Good Food magazine I knew I had to try it, and that I also had to substitute in cherries for the raspberries.

Thankfully I had reason for baking this cake, not that I wouldn’t have done it anyway, but I have friends over this weekend. So what better than a slice of cherry cake with your coffee? 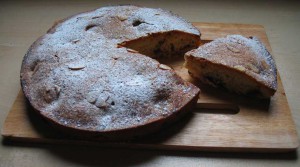 I baked it on Thursday night, as I knew Friday night and Saturday morning would disappear in a flurry of vacuuming and mopping. I haven’t tasted it yet (apart from the crumbs when I was cutting it for the pictures) but I am really looking forward to it. 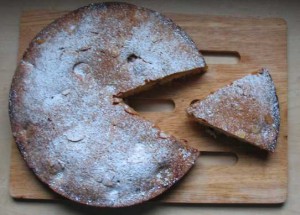 Is it just me or does this look like pacman?

The only changes I made to the Good Food recipe was to replace the butter with 100 grams of Coconut Oil and instead of raspberries I added 200 grams of fresh cherries. To be honest over the past month or so I have stopped using the coconut oil so much, I have defected back to using butter.

Why? Because when I decided to look into the health benefits of coconut oil (I was going to write a blog post “Why you should use Coconut Oil too”) I decided that the “evidence” of health benefits weren’t scientific enough. I couldn’t in all honesty say that I believed that eating Coconut Oil for you was better than butter.

While I am probably not going to use Coconut Oil for health benefits solely in cooking again (unless new evidence comes to light) it does have a great flavour for some types of cooking like this Banana Blueberry and Coconut Bread, and also for vegan cooking. 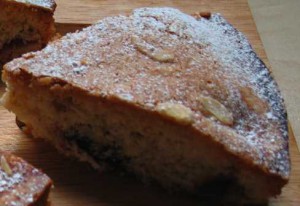 One slice of cherry bakewell cake