Some weeks ago I bought the Bread Bakers Apprentice, as I had heard so much about the Bread Baker’s Challenge. The aim of the challenge is to cook our way through all the breads listed in the book in order! 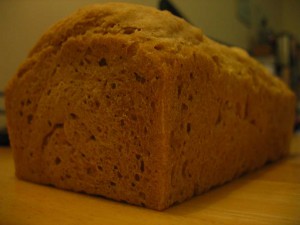 The first recipe in the book (after several chapters on the theory of bread making) is Anadama Bread.

I am fully intending to do all the recipes in the book, as the point of the challenge is to learn something new, however whether I’ll do them all in order is another matter. The recipes are all in alphabetical order so I have a lot of baking to do to get to the pizza dough recipe – which is why I became interested in the book in the first place. I have to go through Artos, Bagels, Brioche, Casatiello … you get the picture, a whole lot of recipes before I get to P.

So I may bend the rules a little, but that’s ok right?

I am not going to go too much into all the different stages of the bread, you can see those in good many other blogs including pinch my salt who started the whole bba thing off. Plus the batteries were running out in my camera so I didn’t get a chance to photograph the whole process.

I guess the main problem I had with this bread was getting the Corn Meal which was supposed to be coarse grind. I got fine grained because it’s all they had at Tesco, it didn’t seem to end up any the worse for it either. 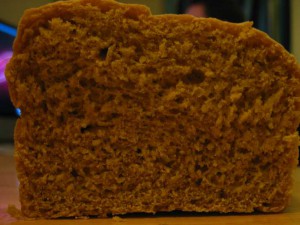 A loaf after a couple of slices

The recipe says to make it over two days, in the end I had to make mine over three, as I had a really busy weekend. On the Saturday I started the cornmeal soaker, this took around two minutes, and then was left overnight. On Sunday I mixed in the remainder of the ingredients and let it go through it’s first proof. However by the time it had finished I had gone out shopping, so I got the boyfriend to pop it in the fridge.

Now after the first proofing you are meant to shape your dough and put it in the bread tins, at this point you can either continue on to the second proofing or put in the fridge. However obviously I couldn’t ask the boyfriend to do anything so complicated. 🙂

On the Monday I took my dough out of the fridge and left to warm up for an hour or so, then I weighed the dough and rolled it ready for the bread tins. At this point it became rather obvious that the dough was still too cold.

Thinking on my feet I put the dough into the tins and then into the oven, it had been on a few hours before and was still a lot warmer than the rest of my flat. An hour and a half later the bread had around doubled in size (but not quite crested the tins), so I decided to take them out the oven so I could preheat it. 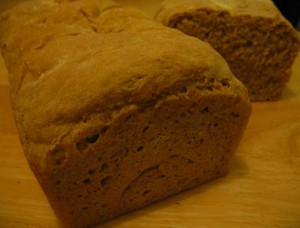 I think my main mistake was not preheating the oven enough, it was nowhere near as hot as it should be. It was a Monday night and already 10 o’clock by the time I turned the oven on, so my bread ended up with a pale crust, which isn’t perfect but was good enough for a first attempt.

The main thing learnt is that I really need to set a whole day aside for being in the flat when I am making bread. Trying to do a final proofing and cooking in an evening after work is just too cramped.

I am really happy with my loaves, they rose properly and taste great – what more could you want for a first attempt at bread making from scratch?

As most people mention in their Anadama posts this is a great sandwich loaf, I had it as a sandwich for my lunch today, and with jam this morning, wonderful! 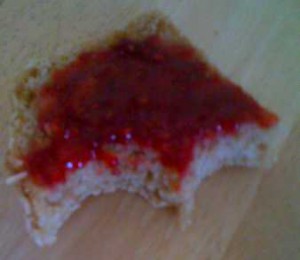 A slice with jam, sorry for the crappy quality iPhone pics don't bring out the best

What to do with Anadama Bread