Sometimes you want to expend a little more effort to make something just that little bit special. A couple of weeks ago I talked about the average Bolognese, the recipe that I turn to when I need something quick, simple and that I’ll enjoy. This however is not quick or simple, but the taste makes it well worth the effort and the wait.

Over the past week and a half I have done no cooking, baking, re-heating what-so-ever, I have barely even stepped a foot in a kitchen! I got back from holiday and spent a couple of days feeling decidedly unwell, so it was a bunch of takeaways and frozen pizzas in this household! Yesterday was the first time I was starting to feel anything like cooking, and I wanted to make something special for The Other Half, to show how much I appreciated him looking after me.

So with a whole week worth of RSS feeds to catch up on I found this recipe for Bolognese Sauce and Fresh Pasta from Spinach Tiger. While tempted to make fresh pasta I am leaving that for another day, plus The Other Half believes Bolognese sauce should only be served with spaghetti, and since this is for him, I’ll leave that battle for another day.

Creating this bolognese sauce is a protracted affair, and I spent at least 4 hours on this one (although the recipe says 6 hours for best results). 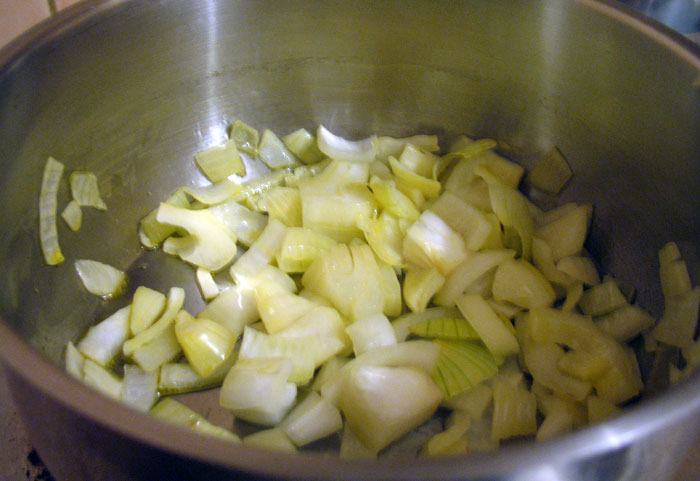 Add some carrots, you are also supposed to add celery at this stage – but I have to say I’m not a great fan – so I missed this out. 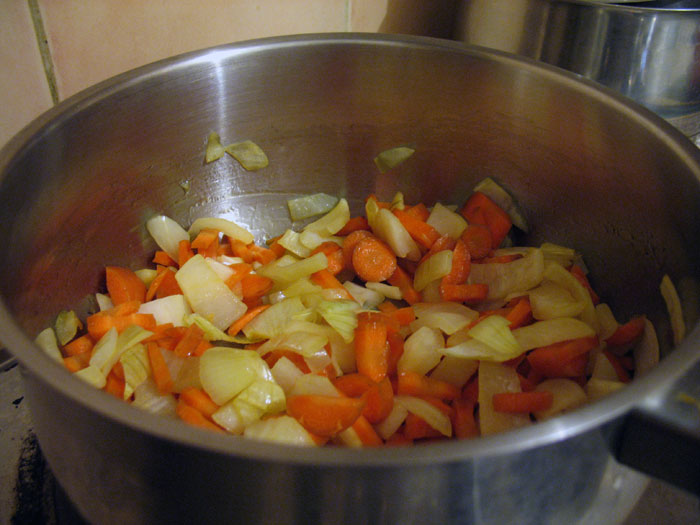 After 6 minutes or so add the mince, and cook slowly until it browns. 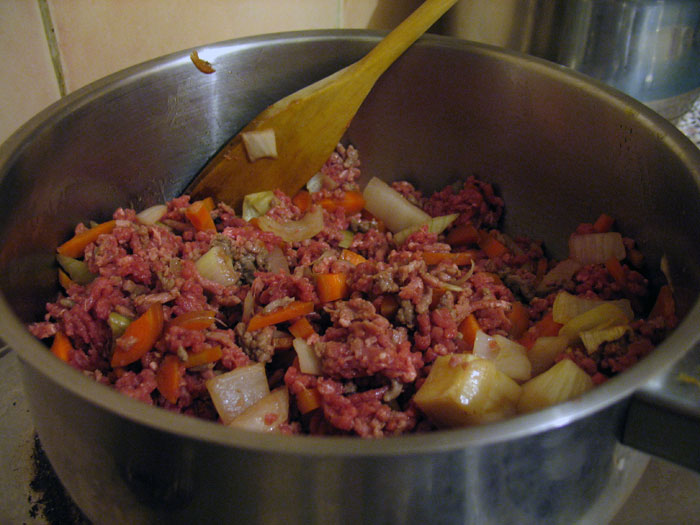 Now add milk – I have to say when I first read this I thought it was crazy. Having never made a traditional Bolognese sauce (only my mum’s before) I didn’t know this was quite so main stream. After a quick Twitter query I found out that loads of people use this method, not just for Bolognese but lots of mince recipes. So somewhat calmed by the Twitter response I carried on. 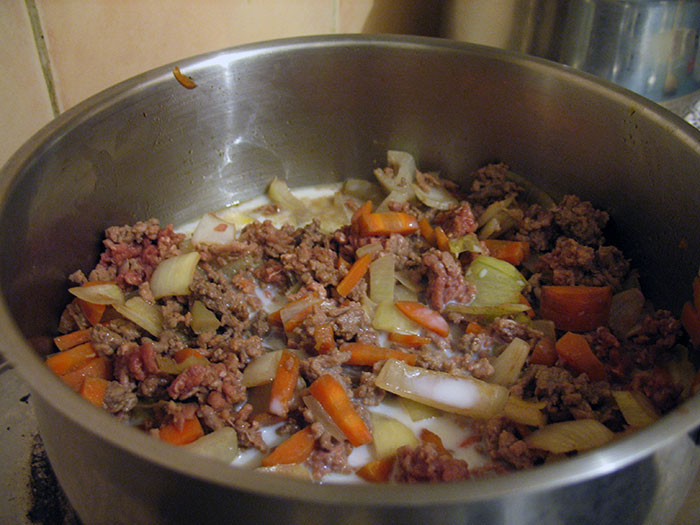 I added the bay leaf at this point, as it didn’t seem to mention at which stage to include it.

After the milk has evaporated I added a glass of wine (the photos of this stage are blurry so I left them out). This too was left to evaporate. 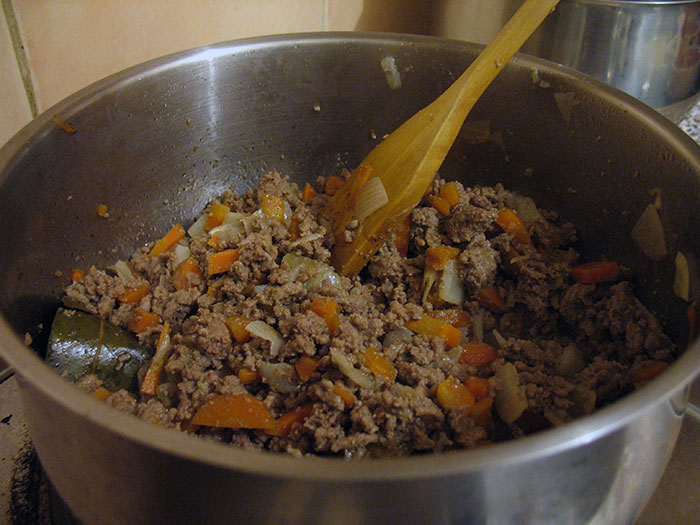 It was then time to add the tomatoes… 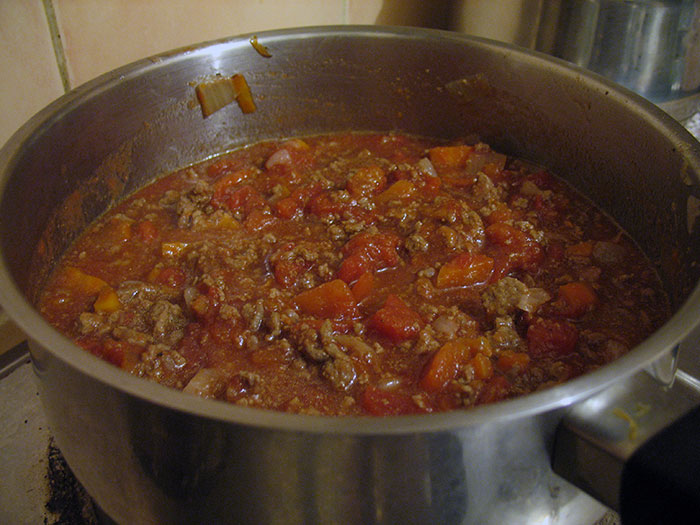 After 2 and half hours gently simmering it smelt pretty good, I was hungry, you can see how these things happen. I’m sorry – I stole some. And it was good. And I am not sorry. 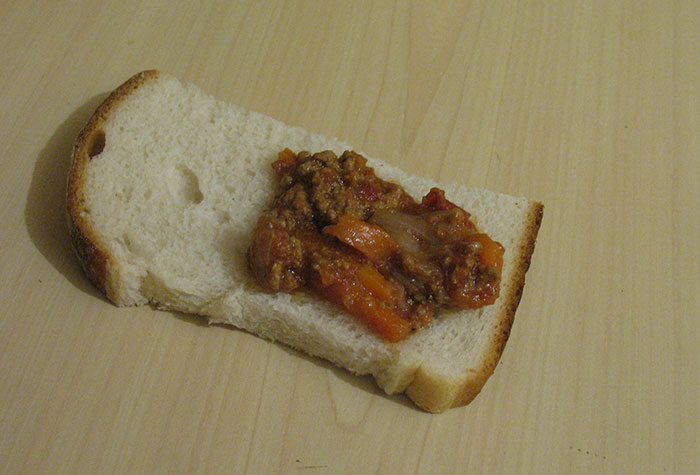 I left the sauce for another half an hour before putting in the fridge for the next nights dinner. While reheating I decided that it didn’t quite taste as tomatoey as I would’ve hoped. This could be because I used Tesco own brand tinned tomatoes, rather than Italian Organic tinned tomatoes, or it could be that I didn’t leave it to simmer enough. So in the end I added two tablespoons of tomato puree and a teaspoon of mixed Italian herbs. 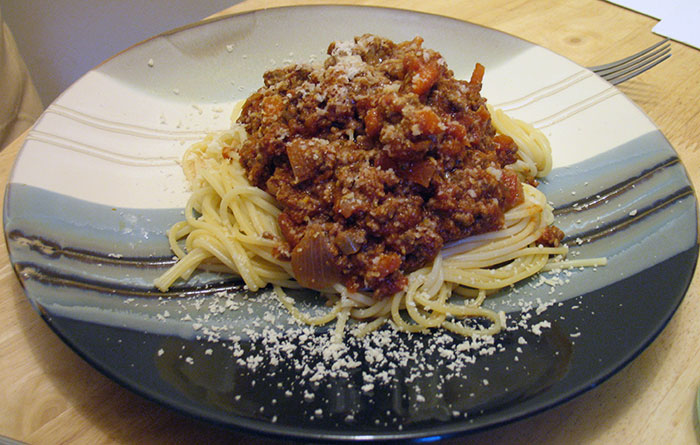 After my last minute additions it tasted pretty damn good, and although it was a massive plateful there was not a morsel left on either plate when we had finished. The Other Half loved it and said he liked it more than my previous Bolognese sauces (hence the title).

Will I make this every time I make Spaghetti Bolognese? Probably not – you need a lot of time outlay, that I just don’t have every week. Will I make it when I have the time? Hell yeah – this is a good recipe, I may make some further tweaks, better tomatoes, and some more herbs earlier on, but essentially this is a great recipe.